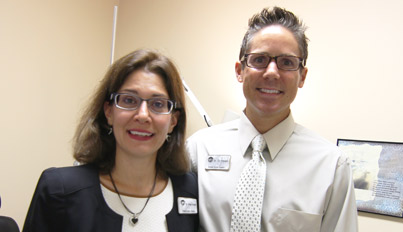 Douglas Family Eyecare of Warren, OH, is a patient oriented office.  We want to guide you through your eye exam as painlessly and care free as possible.  Our fully accredited, licensed and insured services are the best in the area. We offer a full range of frames from value- priced to designer.  At Douglas Family Eyecare, our highly qualified and friendly staff agree that patient satisfaction is our number one priority!  We accept most all insurances and forms of payment.

Dr. Chad J. Douglas, a graduate of Holt High School in Holt, Michigan, received a Bachelors of Science Degree in Biology from Michigan State University. His Doctorate was obtained from the Illinois College of Optometry in 1998. He has completed externships in ocular disease, low vision, contact lenses, and pediatrics in the local Chicago area.

Dr. Chad is actively involved in the community, church, and family life. Dr. Chad loves serving his patients and has a strong passion for his profession.  He is a very accomplished runner including participation in several Chicago and Cleveland Marathons.  He also qualified for and completed the Boston Marathon in 2001.

Dr. Diana M. Douglas is a graduate of Trinity High School in Garfield Hts., OH.  This native Clevelander received her Bachelors of Science Degree in Biology from Ashland University. She also attended Illinois College of Optometry,  where she received her Doctor of Optometry Degree and Bachelor of Science in Visual Science Degree in 1999.  She has completed externships at the Wade Park VA Hospital in Cleveland, OH and Grand Rapids and Battle Creek, Michigan VA Hospitals as well.

She enjoys primary care and pediatrics.  Dr. Diana loves spending time with her children, playing the piano, and scrapbooking.

Drs. Chad and Diana both spent several years as part of a full scope group practice in Michigan before moving to Warren.